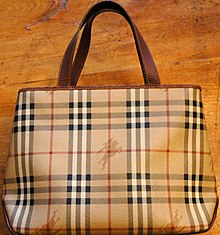 A small tote bag by Burberry. 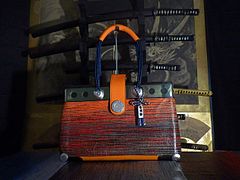 A tote bag is a large and often unfastened bag with parallel handles that emerge from the sides of its pouch.

The archetypal tote is made of sturdy cloth, perhaps with thick leather at its handles or bottom; leather versions often have a pebbled surface. Common fabrics include heavy canvas, possibly dyed, or treated to resist moisture and mold. Jute is another traditional material, though less popular. In recent decades, heavy nylon and other easy-care synthetics have become common, although these may degrade with prolonged sun-exposure. Many of today's inexpensive or free totes are often made from recycled matter, from minimally-processed natural fibers, or from byproducts of processes that refine organic materials.

The term tote or tate, meaning "to carry", can be traced back to the 17th century but was not used to describe bags until 1900. However, the tote bag craze in the United States began in the 1940s with the release of L.L. Bean's Boat Bag in 1944. Because they were easier than carrying luggage, most people opted for using tote bags. During the 1950s, tote bags began to enter into the main culture. Women primarily utilized them as practical handheld bags because they didn't require much care. It wasn't until the 1960s when the tote bag embraced personal style. Bonnie Cashin released her own line of tote bags called Cashin Carry Tote Bags which combined style and functionality. In the 1990s, Kate Spade ultimately transformed how American culture embraced tote bags when she began carrying them as fashion bags. Today, fashion lovers and consumers can find tote bags in a variety of decorations and themes.

Recently, tote bags have been sold as a more eco-friendly replacement for disposable plastic bags given how they can be reused multiples times over. However, a study by the UK Environment Agency found that cotton canvas bags have to be reused at least 327 times before they can match the carbon expenditure of a single disposable plastic bag. Meanwhile, tote bags made from recycled polypropylene plastic require 26 reuses to match.

But as these tote bags have grown in stature and ubiquity, their abundance has encouraged consumers to see them as a disposable item that they don't need to reuse, defeating their very purpose. Not only do many stores offer inexpensive or even free tote bags at the register, they've also become a common marketing tool stamped with logos and used by nonprofits and businesses as promotional gifts.

This can be seen by a 2014 study which found that owners of reusable bags forget them on approximately 40% of their grocery trips and use them only about 15 times each before being discarded. Moreover, about half of respondents typically chose to use plastic bags over reusable ones, despite owning reusable bags and recognizing their benefits.